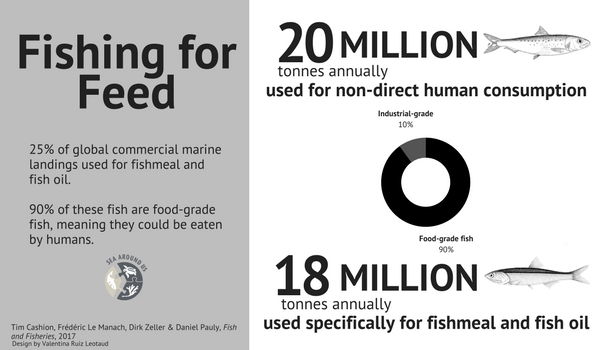 Every year for the past 60 years, an average of 20 million tonnes of fish caught in the global ocean have not been used to nourish people.

A new study emerging from the Sea Around Us project at the University of British Columbia’s Institute for the Oceans and Fisheries reveals that from 1950 to 2010, 27 per cent of commercial marine landings were diverted to uses other than direct human consumption.

This trend has not changed in recent years and it poses serious questions regarding food security, as most of the diverted fish are classified as food-grade or prime food-grade.

Out of the grand total, 18 million tonnes of fish have been being used specifically in the production of fishmeal and fish oil, which are commonly fed to aquaculture and livestock species.

According to Tim Cashion, a researcher at the Sea Around Us and lead author of the study “Most fish destined for fishmeal production are food-grade fish” published in Fish and Fisheries, the use of prime fish resources to artificially feed farmed fish, pigs and chicken is a cause of concern as fish are an important source of nutrients and animal protein for 2.9 billion people across the world.

Furthermore, fish used to feed other fish are often sourced in the waters of developing countries, which puts pressure on their fish stocks and reduces locals’ access to fresh seafood. In general, these food-insecure communities are also denied access to final aquaculture products because most of those products are exported to developed countries.

On top of this, Cashion and his co-authors, Daniel Pauly, Dirk Zeller, and Frederic LeManach, also found that there is an increase in the variety of fish being used for non-direct human consumption. This trend is mostly fueled by the growth of fed aquaculture in Southeast Asia and China and the depletion of overfished stocks of former target species.

The analysis is based on information extracted from the Sea Around Us global database, specifically the reconstructed commercial landings data (industrial and artisanal) by taxon for each fishing country for each year from 1950-2010.

To schedule an interview with the author, please contact Valentina Ruiz Leotaud v.ruizleotaud@oceans.ubc.ca